Ethernet cables are classified into sequentially numbered categories (e.g. Cat6, Cat7) according to different specifications. And these categories are how we can easily know what type of cable we need for specific transmission speed, Cat5e Ethernet cable supports up to 1000Mbps, while the latest category Cat8 Ethernet cable can be up to 25/40Gbps. But as for shielded vs unshielded Ethernet cable, how to choose? To find this out, make sure you know the basic information and differences between the two types.

A shielded cable or shield twisted pair (STP) cable has an outside layer or “shield” of conductive material around the internal conductors, which needs to be grounded to cancel the effect of electromagnetic interference (EMI). The conductive shield can reflect or conduct external interference away without affecting the signals of the internal conductor. Therefore, shielded Ethernet cables are usually used to protect signals from EMI over the length of the cable run, so as to result in faster transmission speeds and fewer data errors.

Unshielded means no additional shielding like meshes or aluminum foil are used. Because of this, unshielded Ethernet cables, also called unshielded twisted pair (UTP) cable are lighter and cheaper. These Ethernet cables are designed to cancel EMI with the way the pairs are twisted inside the cables. Compared with the shielded cables, unshielded cables provide much less protection. These cables performances are often degraded when EMI is present. 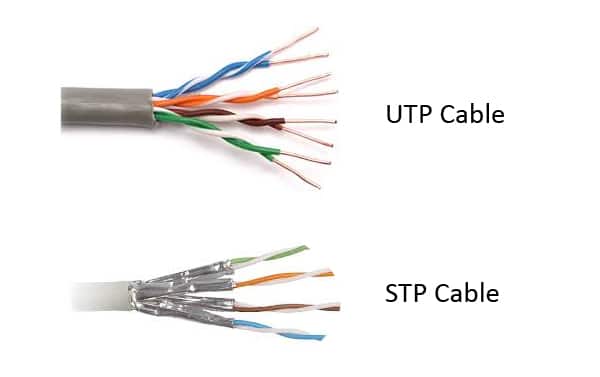 This is a figure of Cat6 shielded and unshielded cable.

The typical difference between the two types lies in the application. Because of the shielding material design, STP and UTP cable will result in different performance. For example, Cat6 shielded and unshielded cable can be up to 10Gbps speed. However, in some cases such as the radio or airports stations, Cat6 UTP cable will experience slower speed and more data transmission errors may be caused when they are close to the machines or other electronics that produce high EMI. But with the additional shielded safeguard, Cat6 STP cable can provide some protection from EMI, performing better than the UTP one. Therefore, STP cables are the best choice for the environments where there is a high chance of electronic interference, while UTP is most suitable for office or home LANs.

In addition, due to the different designs, their cabling grounding methods are different. UTP cables don’t rely on grounding to the same extent as STP cabling. This will decrease the installation time and cost. However, STP needs a more robust grounding and bonding process. And note that the wrong grounded shield actually can worsen crosstalk and electromagnetic interference.

Which Should I Choose?

As for shielded vs unshielded Ethernet cable, the best choice should largely depend on where you plan to install the cables. As mentioned above, STP and UTP cables are widely used in different fields due to EMI interference requirement. Airports, medical centres and factories often benefit from STP cabling, because these places need to process numerous machines that produce considerable amounts of interference. On the other hand, for home and office use, it’s wise to choose UTP cables.

Besides, the budget is another factor which may determine the final decision. It’s believed that STP cost much more than UTP since it can provide better protection from EMI. It’s true, but the gap is narrow. For instance, Cat6 Ethernet cable at FS, the Cat6 UTP of 10ft length costs 2.6 dollars while Cat6 shield cable with the same length needs 3.6 dollars, there is only a very small gap, which may be significant for large scale installations, but not for small networks.

Therefore, as for shielded vs unshielded Ethernet cable, it should be determined by the intended application. If you’re still not sure what type of cabling you need, please contact us via sales@fs.com for expert advice.

The following is the overview of Ethernet cable speed of Cat5, Cat5e, Cat6, Cat6a, Cat7 and Cat8.

Cat5 Ethernet cable is the oldest type of these cables. It can support either 10Mbps or 100Mbps speed with a bandwidth of up to 100MHz, which was the first Fast Ethernet-capable to be introduced. However, with technology develops, this old-fashioned cable is no longer a recognized standard, that it’s hard to find it in today’s stores.

Cat5e is an enhanced version of Cat5 cable. This Ethernet cable speed is up to 1000Mbps or “Gigabit” speed. In theory, it could be ten times faster than Cat5. Besides, it decreases crosstalk that happens between two wires inside a cable. Cat5e Ethernet cable is the most widely used category on the market.

Cat6 is certified to handle Gigabit speed with a bandwidth of up 250MHz. And it can be capable of 10Gbps speed under ideal circumstances. Cat6 Ethernet cable has some improvements like the better insulation and thinner wires, providing a higher signal-to-noise ratio. Thus, it’s quite suited for environments with higher electromagnetic interference. Note that, Cat6 Ethernet cable is provided with two forms, shielded twisted pair (STP) and unshielded twisted pair (UTP).

Cat6a Ethernet cable allows 10Gbps data transmission rate with the bandwidth of up to 500MHz. Its transmission can achieve to 100 metres, which is longer than the 37-55 metres of Cat6 cable. Cat6a is usually available in STP form. This cable is ideal for industrial situation, but lack flexibility that is often needed for a residential deployment.

Ethernet cable speed of Cat7 can reach to 10Gbps with a bandwidth of up to 600MHz. It consists of a screened, shield twisted pair of wires, which completely eliminates alien crosstalk. It’s more suited to data centres than home use.

The typical technical differences are clear to see. As the category number increases, so does the Ethernet cable speed and bandwidth. This is not a coincidence, because each category brings more rigorous testing to eliminate crosstalk and add isolation between the wires. Thus, Cat8 supports the highest transmission speed.
As for the physical differences, Ethernet cables use different construction and isolation to eliminate interference and allow for faster speeds. Take the cables from FS.COM as an example. Its Cat6a, Cat7 and Cat8 use screen shield and aluminum foil shielding for reducing crosstalk, while Cat5e and Cat6 don’t. So Cat6a, Cat7 and Cat8 have better performance. 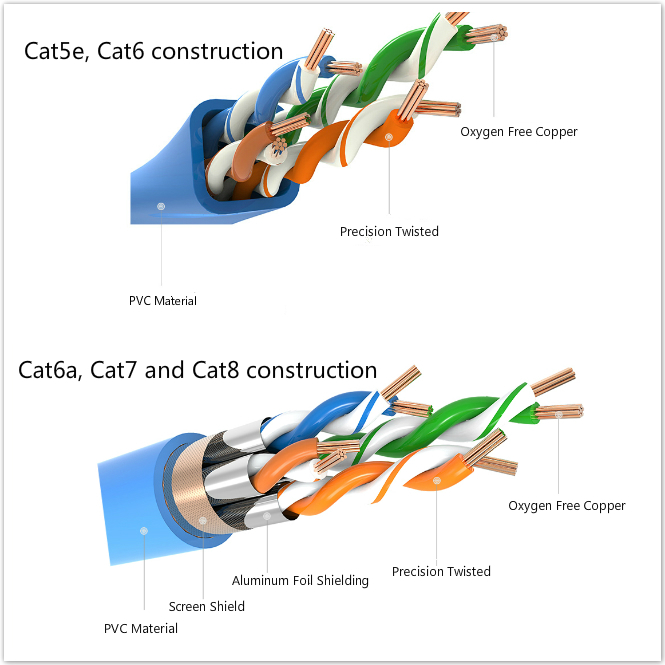 Is It Worth to Upgrade?

Actually, for home connections, a Cat5e or Cat6 cable with 1Gbps Ethernet cable speed is fast enough. People should note that upgrade cables will not make a difference in how fast you load websites, because the Internet speed depends on many factors but not just the Ethernet cable speed. But for places like data centres, of course, the faster the better. Because these places have high requirements for transmission speed. If you decide to buy Ethernet cables, welcome to order at FS.COM that provides comprehensive products of Ethernet cables.

Ethernet cable has never stopped its development to cater for the ever increasing demand of higher performance data center. Cat5e and Cat6 RJ45 cables are two most commonly used Ethernet cables in current market. As their names implied, the difference between them are defined by the number and letter “5e” and “6”. What do these terms mean? Cat5e vs Cat6 RJ45 cable: What’s the difference? This article is dedicated to answering this question. 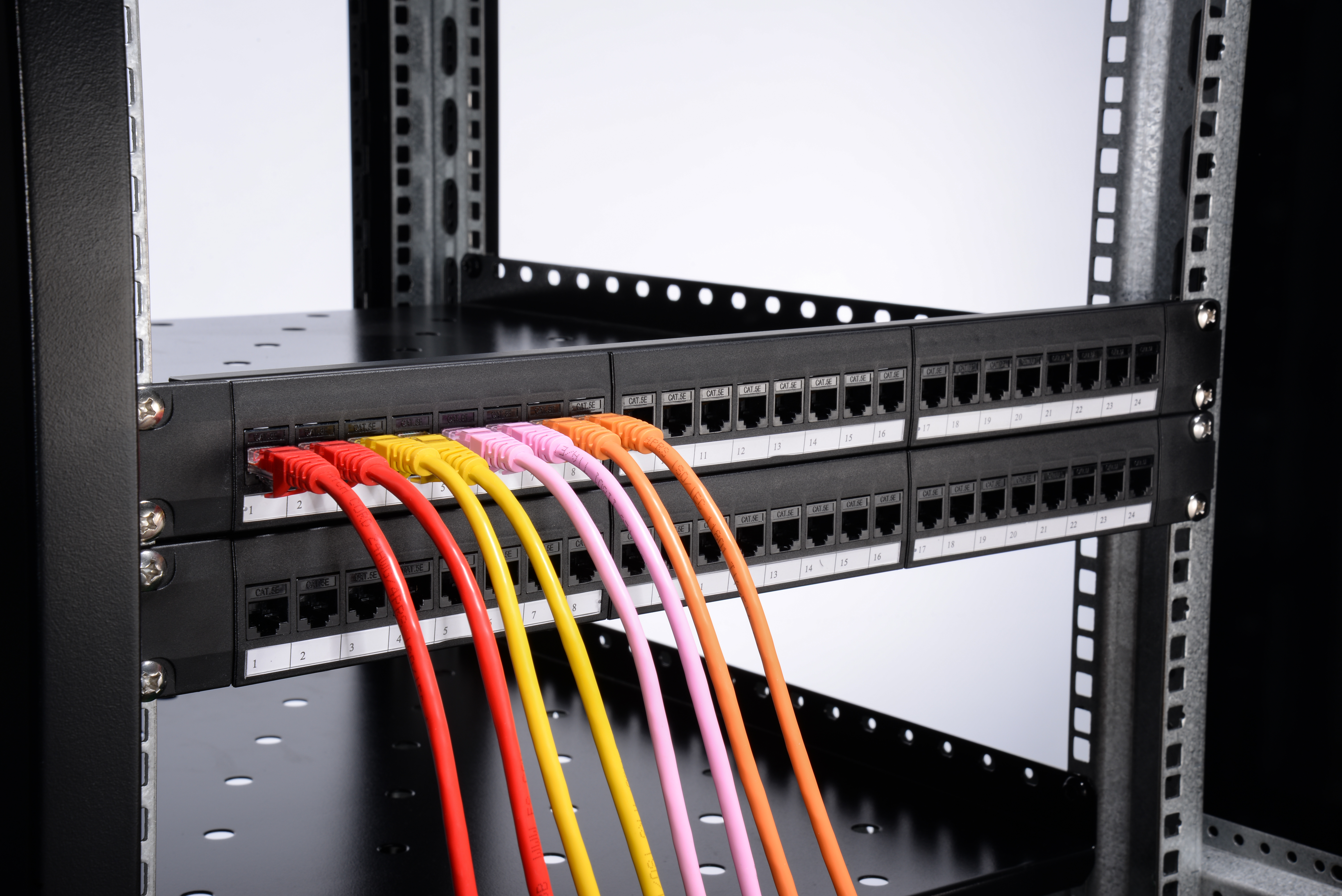 Cat5e and Cat6 are two different Ethernet cables classified by standard categories. The “Cat” refers to “Category of cable”, and the terms “5e” and “6” refer to different standard of category.

What Is Cat5e Cable?

Cat5e cable (Category 5e cable) is an enhanced version of Cat5. While inheriting the construction and 100MHz bandwidth of its predecessor, Cat5e improves performance by introducing optimized specifications in data rate and crosstalk defense. It transfers data at 10 times the speed of Cat5 cable, up to 1000Mbps. It supports Gigabit Ethernet and frequently used in home networking environment with various lengths and premise wiring. 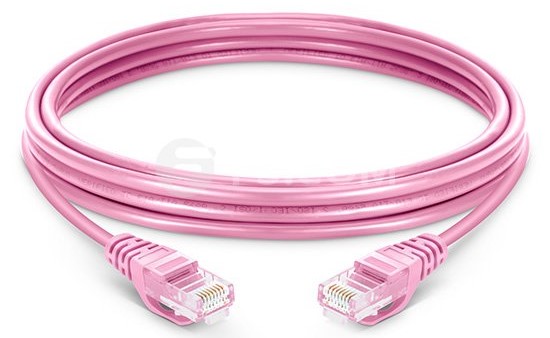 What Is Cat6 Cable?

Cat6 cable (Category 6 cable) is a standard twisted-pair cable for Ethernet and other network layers. It has a 250MHz bandwidth and can rate up to 10Gbps in a limited distance of 55 meters. It can also reach to 100 meters (328 feet) at a slow rate of 1000Mbps. For its high speed, Cat6 cable is widely used to handle 10GbE. Moreover, Cat6 has excellent capability to reduce crosstalk due to improved shielding and twisted-pair cable design. 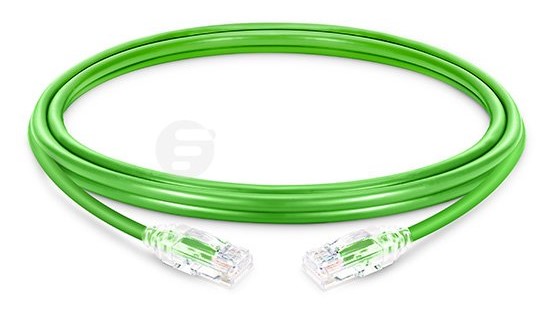 As the table shown, although Cat5e and Cat6 RJ45 cable share commons in RJ45 connector and construction feature of twisted-pair copper wires, they are totally different standards of Ethernet cable. Cat5e RJ45 cable has lower level of transmission performance, while Cat6 RJ45 cable is optimized with a 250MHz bandwidth, higher data rate and stronger resistance to crosstalk and noise. The following passage will focus on the illustration of their functional differences.

Cat5e cable is limited at a 100MHz bandwidth, while Cat6 cable has a high bandwidth of 250MHz, which leads to different data rate. Cat5e can reach up to 1Gbps at a distance of 100 meters. The data rate of Cat6 varies based on its maximum length. Over long distance transmission within 100 meters, maximum data rate of Cat6 is 1000Mbps. In short length limited in 55 meters, it can support 10 Gigabit Ethernet. It is noted that in high crosstalk condition a transfer distance only within 33 meters is available.

This article made a comparison and contrast between Cat5e vs Cat6 RJ45 cable. While finding some similarities, it focus on their functional difference: crosstalk resistance ability and data rate. Cat6, as a descendant of Cat5, it owns higher standard of SNR and data rate, which gives it an edge in higher performance conditions required 10 Gigabit Ethernet.