An optical fiber cable uses light wave for voice and data transmission, its data transmission capacity is 4.5 times more than conventional copper cables. So in the past several decades, we have seen that fiber optic cables are superior to traditional copper twisted-pair cable or coaxial cable because of its unique physical characteristics, allowing information to travel at speeds increasingly approaching the speed of light without interference between adjacent wavelengths. In leading market, the global drive to implement FTTx into more new venues is good news for the market of optical fiber cables. Another good trend is that the price erosion of optical fiber cables had been 10 to 15 percent annually, in result that the demand of optical fiber cable is expected to continue growing in the foreseeable future. And the growing data transmission workloads placed by high-performance computers, servers and network storage systems is helping spur growth in the market. Consequently, fiber optic cables are now the indispensable backbone of today’s communication network. This article will analyse the global optical fiber cable market in three main applications, including long-distance communication, submarine cable and FTTx network.

According to the report “Fiber Optics Market by Cable – Global Forecast to 2021”, the optical fiber cable market is anticipate to grow at a CAGR of over 9.8% during 2016-2021. The growing importance of cloud computing, data transfer & storage, and IoT is driving the use of Internet, which is driving the fiber optic cable market, as it acts as the backbone for data transmission. Moreover, growing technological advancements increase in number of connected devices and data centers are expected to positively influence global optical fiber cable market. In addition, next generation technologies such as LTE and FTTx, which require last mile connectivity, is expected to propel the demand for optical fiber cables in the coming years. All these factors have led to an increase in Internet users, which in turn has led to the higher usage of optical fiber cable to transfer information over the Internet, thus driving the fiber optics market. 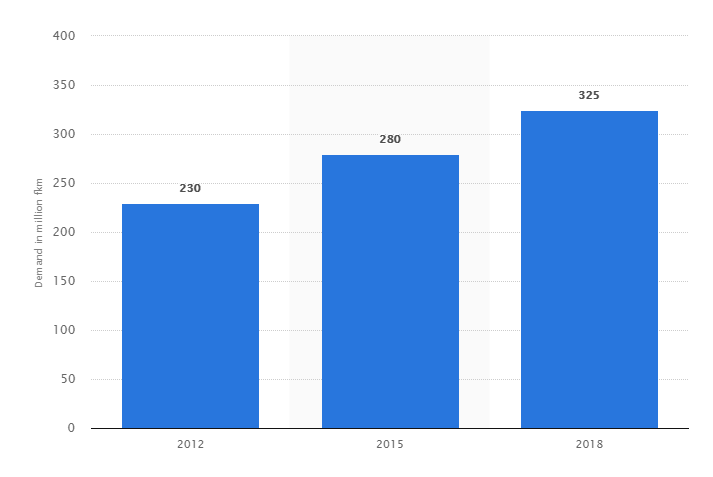 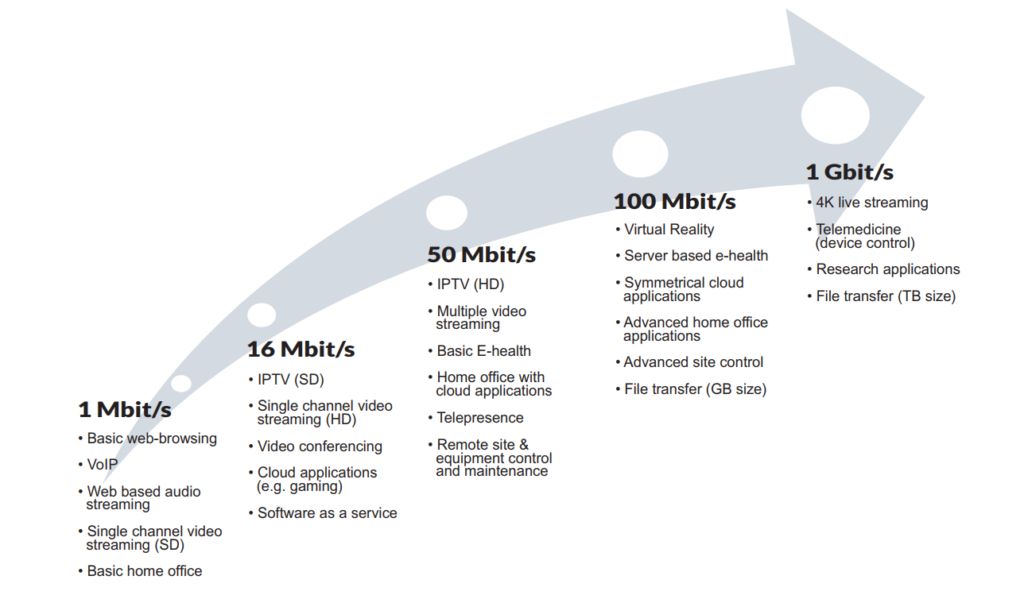 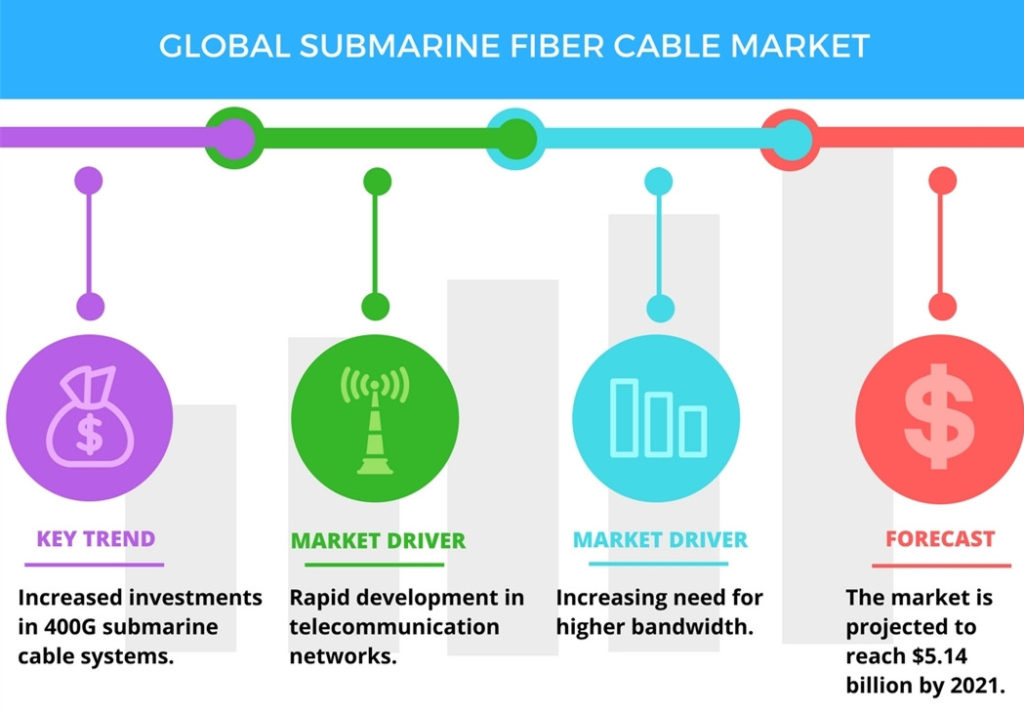 In recent years, the market for optical fiber cable has shifted dramatically to local deployments, away from long haul and regional. This is the impact of FTTx, which calls for far more dense applications in neighborhoods, cities and other highly focused areas. Optical fiber cable is being caught up in the global move to broadband in the near future. The next generation of high bandwidth applications, along with the proliferation of connected devices, is expected to require faster and higher bandwidth networks which will require the use of multimode fiber cable for data transfer. This growth in the FTTx networks in turn is expected to drive the fiber optics market. Future Market Insights (FMI) forecasts the global fiber to the home (FTTH) market’s value will grow from $9.5 billion in 2017 to more than $37 billion by the end of 2027, a 14.4% compound annual growth rate (CAGR). In the leading Asian economies, more than 44% of all homes and buildings are already directly connected to the fiber optic cable network; in North America penetration is 8.4%, in Europe 5.6%. 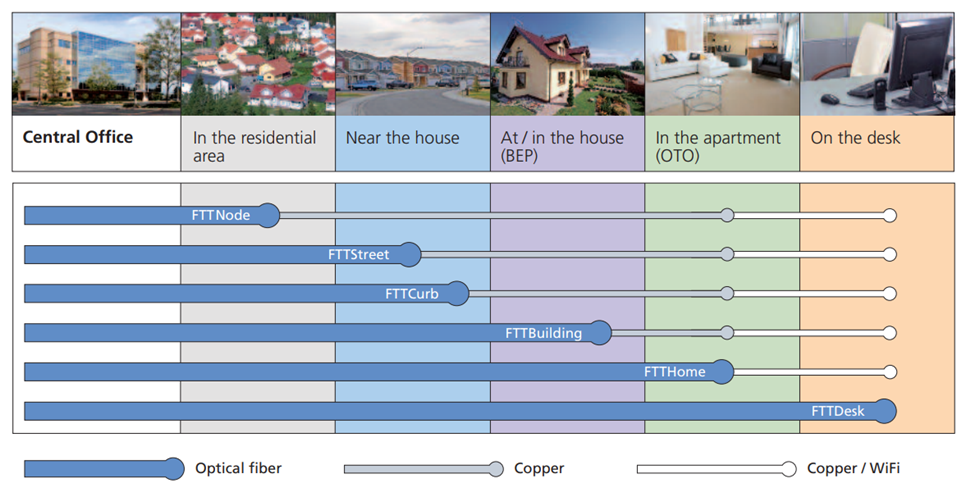 Fiber optic cable is widely used for data transmission and is increasingly being used in place of metal wires because of its efficiency and high transmission capacity. Since the use and demand for great bandwidth and fast speed, there is no doubt that fiber optic transmission will bring more opportunities and be continuously researched and expanded to cater for future demands. However, although fiber optic cable in itself is considered a long-term stable investment, it also faces huge challenge. The major restraint in the fiber optics market is the growing use of wireless communications systems in remote areas.

Related Article: The Advantages and Disadvantages of Fiber Optic Transmission

FTTX (Fiber-To-The-X) is know as different Passive Optical Network (PON) configurations which can be used to describe any optical fiber network that replaces all or part of a copper network. It is different from the traditional fiber optic network used for Local Area Network (LAN) applications.

A transceiver, or converter, is typically a device that has two receptacles or ports. One mates with the transmit optical fiber and the other mates with the receive optical fiber. This allows the device to be transmitting and receiving simultaneously. This is known as full-duplex operation, e.g., a 1000BASE-T SFP transceiver with a RJ45 port can take advantage of this operation. In an FTTX single optical fiber application, full-duplex operation is typically not possible; usually only half-duplex operation takes place. This means that part of the time the optical fiber is carrying a signal in one direction, and the rest of the time, it is carrying a signal in the other direction. The key to making this system work is timing. Data is sent downstream for a predetermined amount of time and then data is sent upstream for a predetermined amount of time. This process is also known as Time Division Multiplexing (TDM). 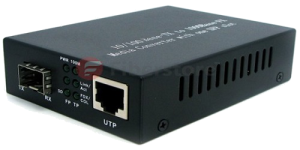 An FTTH PON uses optical fiber from the central office to the home; there are no active electronics helping with the transmission of data in between the two locations. The central office is a communications switching facility. It houses a large number of complex switches that establish temporary connections between subscriber lines that terminate at the central office. At the home, a converter box (e.g., a Fiber to Copper Media Converter with SFP and RJ45 ports) changes the optical signal from the optical fiber into electrical signals. The converter box interfaces with existing home cabling such as coaxial cabling for cable TV, twisted-pair cabling for telephone, and Category 5e or 6 cabling for Internet connectivity.

An FTTB PON is very similar to an FTTH PON. It uses optical fiber from the central office to the building and there are no electronics helping with transmission in between. The optical signal from the optical fiber is converted into electrical signals in a converter box at the building. The converter box interfaces with existing cabling such as coaxial cabling for cable TV, twisted-pair cabling for telephone, and Category 5e or 6 cabling for Internet coonectivity.

FTTD is a ideal of FTTX solution. Fiber connection is installed from the main computer room to a terminal or fiber media converter near the user’s desktop. FTTD is a high-bandwidth solution that expands the traditional fiber backbone system by running fiber directly to desktops. It is a horizontal wiring option that pushes the available bandwidth beyond 10G. It is an intriguing, underestimated and overlooked way to create a beneficial system that is expandable and performance-driven.