PoE is a networking technology that supplies power to network devices over existing data connections. Various applications in our life, such as new wireless access points, cameras and some types of security devices, are using this technology. Because it can bring many benefits: one cable for both power and data transmission; simpler deployment of devices; no need to upgrade existing cabling systems. This post explores some basic knowledge about the main elements in PoE technology. 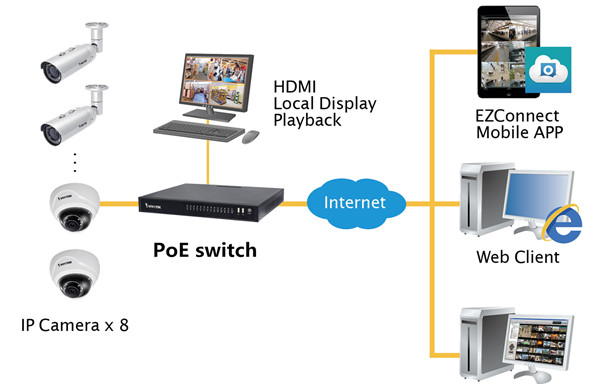 The IEEE 802.3af is a standard that defines how power would be delivered to devices utilizing 10BASE-T, 100BASE-T and 1000BASE-T technologies. It defines delivery of up to 15.4 watts per port to Ethernet devices, typically using 48 volts. Generally, many devices like IP phones, hand-held PCs, magnetic card readers are being developed to utilize IEEE 802.3af. Besides, this standard also defines two major pieces of hardware, the power device (PD, receiving power) and power sourcing equipment (PSE, delivering power to PD).

Except the function to deliver power to PD, the PSE has other two functions: detect a PoE capable PD and monitor and terminate the supplied power. There are two types described in the definition of a PSE: endpoint PSE and midspan PSE. An endpoint PSE is a PoE capable port on a switch that is directly connected to the cable supplying power to the PD. Power is delivered by the endpoint PSE using either the active data pairs (usually the orange and green pairs in Ethernet—Pins 1,2 and 3,6) or the spare pairs (usually the brown and blue pairs—4,5 and 7,8). These two delivery methods are referred to as alternative A and B. Alternative A uses the active data pairs; and alternative B uses the spare pairs. Just like the following picture shows.

In order to be 802.3af compliant, the PSE must support both alternative A and B. However, only one method will be used to provide power to a device. Typically, this will be the A method for the standard 802.3af PSE.

As have mentioned above, PD is a device to receive power. An 802.3af compliant powered device is able to accept power using either the alternative A or B method. It doesn’t support receiving power on devices that require power on either the data pair or spare pair that are not compliant, nor the devices that need power on four pairs. What’s more, PDs can be qualified into classes according to their power needs. In a start-up process, when a PoE connection is made, the PD can advertise its power class to show how much power is required. The following picture is an example.

PoE plus was created in 2004. It’s an update to PoE. And it compliant to the IEEE802.3at, aiming to provide more power for devices. That’s the major difference between PoE and PoE plus. Besides, the PSEs of PoE plus can supply power to both PoE and PoE plus PDs. But the converse version cannot go through, for PoE plus PDs require more power than that PoE PSEs can provide. PoE plus technology is also prevalent in business applications. For example, some managed gigabit switches based on PoE plus technology deliver robust performance and intelligent switching for growing business networks.

With the rapid growth of telecommunications, the use of PoE to power devices such as wireless access point, VoIP phones, and computers is also getting frequently. Therefore, demand for PoE goes up, so does the demand for the amount of power provided, which put forward more requirements for PoE. Another problem is the overall power draw to the switch itself.

PoE is increasingly being applied to provide power to devices like phones, surveillance and laptops used in our daily life. And PoE switches and PoE media converters for Ethernet networks bring convenience for small business networking systems. Getting understanding of the basic components of PoE is beneficial to make it work better for our life.