CWDM network, as an easy-to-deploy and cost-effective solution, has been applied in many areas. Although CWDM network is not as perfect as DWDM networks in data capacity, it still can satisfy a wide range of applications in optical applications. And CWDM is a passive network, allowing any protocol to be transported over the link, as long as it is at the specific wavelength. This article is going to describe several application cases of 10G CWDM network in different areas.

As has mentioned above, 10G CWDM network has been widely deployed in different areas. Here are the common CWDM network infrastructures.

CWDM ring links are suitable for interconnecting geographically dispersed LANs and storage area networks. Business can benefit from CWDM by using multiple Gigabit Ethernet. As shown in the below picture, the four buildings are connected by several 8 channels CWDM Mux/Demuxes. 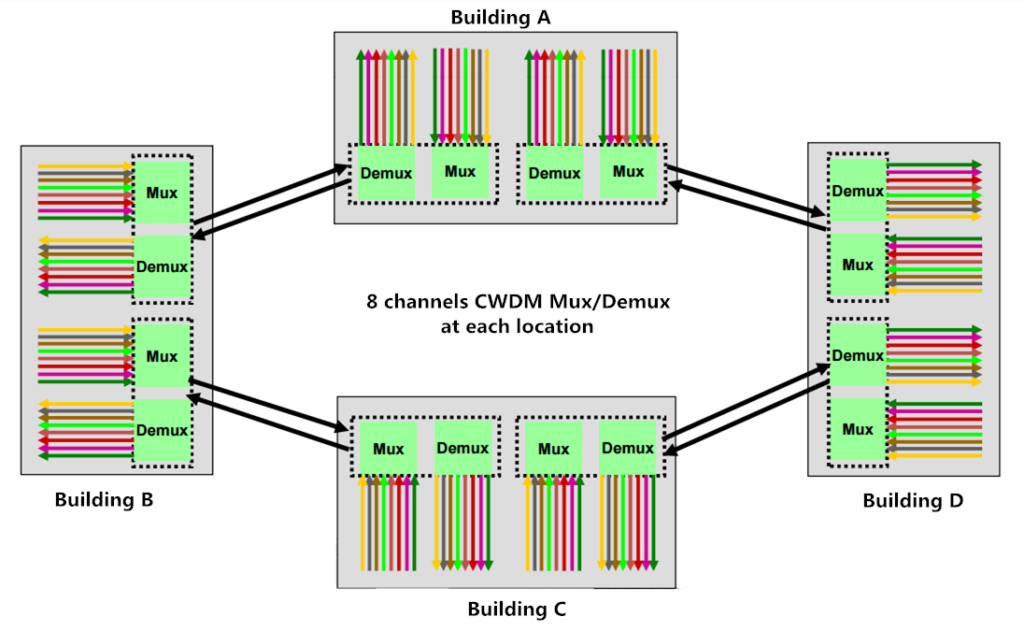 CWDM uses different wavelengths to carry different signals over a single optical fiber, which offers many benefits to service providers that need to better utilize the existing fiber infrastructure. In this application, two Cisco switches are connected together through four 8 channels CWDM Mux/Demuxes. Signals are multiplexed and then transmitted through two strands fiber cables.

As the scale expansion of many campus, the need for adding bandwidth of new applications is increasing too. And the new campus, school teaching and student life Internet require a lot of bandwidth resources, so building a new network is undoubtedly needs a large investment. Then how to make a full use of existing fibers is a problem needed to be resolved.

In this case, four 8 channels CWDM Mux/Demux with expansion port are used to double the capacity on the existing fiber without the need for installing or leasing additional fibers, which reduce cost and labor.

As the development of WDM technology and market, the deployment of CWDM network will be more lower. FS.COM provides affordable CWDM network components at a low price. Following is a list of our products.