Driven by need for high speed Ethernet and increasing services like Cloud and virtual data center, many data centers have been loaded with numerous cables and various equipment. Due to this case, shortage of data center space is common but it’s getting difficult and expensive to build new or expand existing locations. Today this post intends to introduce a type of cable – DAC cable (direct attach cable), which can solve this problem effectively.

Direct attach cable is a type of copper cable similar to coaxial cable, but it has SFP+, QSFP+ or QSFP28 plus at each end integrated. DAC cable is usually used in data centers for short transmission between racks. Generally, according to the construction differences, the DAC cable comes in two types: passive and active DAC. Passive cable is suitable for short distances up to 10 m and active DAC has a little longer transmission distance up to 15m at 10Gbps or 40Gbps, because it has an active component to boost/receive signal. And passive DAC cable requires no power for internal electronics, which avoid consuming power or produce heat. While active DAC comes in reverse, it needs power to make its internal circuits work properly.

On today’s markets, in order to satisfy the ever growing need for cost-effective delivery of more bandwidth, there are mainly three kinds of DAC according to the transmission rate: 10G SFP+ DAC, 40G QSFP+ DAC and 100G QSFP28 DAC.

40G QSFP+ cable offers a way for 40G Gigabit short distance connections between QSFP ports switches. As its name shows, 40G QSFP+ DAC has QSFP+ connectors on both ends. And it uses integrated duplex serial data links for bidirectional communication. 40G QSFP+ DAC is a little different from 10G DAC cable. There are two types of 40G QSFP breakout DAC cables: 40G QSFP+ to 4XSFP+ DAC and 40G QSFP+ to 4xXFP DAC. These breakout DAC cables can be used to migrate from 10G to 40G.

Twinax DAC cables come into play in data centers mainly because of two factors which also show its superiority. We all know that denser equipment in the data center or server rooms will consume more electrical power and produce more heat. That means more cooling systems are required. However, DAC cables have the potential to reduce the overall power consumption and heat dissipation, which help network operators save cost. Another factor is that DAC cable is robust and does not need patch panels or additional cables when connected to devices, as is the case with an optical module. The modules on both ends make them sturdy and reliable as well as space-saving. 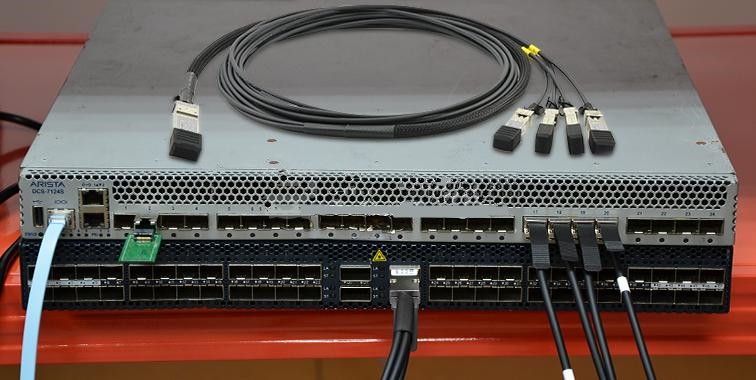 Nothing can be perfect, so do the DAC cables. Although they can save space and cost for data center managers, the drawbacks still exist. As the main element of DAC cable is copper, it is heavy and bulky, causing difficulties for management. What’s more, if DAC cables are deployed in high volume, the cable diameter and cable stiffness are another problem that should be considered. In this case, active optical cables (AOC cables) seem to be a better choice, for they are made of thinner and more pliable optical cable.

DAC cable provides a low power consumption and high-speed solution for data center interconnections. With the ability to support data rate of 10G, 40G and 100G, they are now widely used in optical links. All the DAC cables mentioned above are supplied in FS.COM. If you need to know more details, please visit www.fs.com or directly contact us via sales@fs.com.

The increasing bandwidth demands in data centers call for new cost-effective network solutions that are able to provide great bandwidth and improved power efficiency. As such, direct attach cables (DACs) are designed to replace expensive fiber optic cables in some Ethernet applications, like choosing SFP+ DACs and QSFP+ DACs accordingly as 10 Gigabit Ethernet (GbE) and 40GbE cabling solutions to achieve high performance. How much do you know about this kind of cable? Do you know its such basic information as classifications? If not, then you can follow this article to understand DAC in depth based on the two main questions.

Question 1: What Is DAC?

DAC, a kind of optical transceiver assembly, is a form of high speed cable with “transceivers” on either end used to connect switches to routers or servers. Often referred to as twin-ax, this direct attach twin-axial cable is very similar to coaxial cable, except for one additional copper conductor core. DACs are much cheaper than the regular optics, since the “transceivers” on both ends of DACs are not real optics and their components are without optical lasers. In some 10GbE and 40GbE infrastructures, DACs have been selected to replace fiber optic patch cord when the required link length is relatively short. And in storage area network, data center, and high-performance computing connectivity, DACs are preferable choice because of their low cost, low power consumption and high performances.

Question 2: How DAC Is Classified?

Based on Ethernet transmission rate and construction standard, 10G SFP+ DACs, 40G QSFP+ DACs, and 120G CXP+ DACs are all available, meaning that DAC can be used as transmission medium for 10GbE, 40GbE, and 120GbE applications when combined as transceivers. Typical DAC assemblies have one connector on each end of the cable. Take SFP-10G-AOC1M for example, this Cisco compatible SFP+ to SFP+ Direct-Attach Active Optical Cable assembly has one SFP+ connector on each end of the cable, designed for relatively short reach that is 1m.

According to material of cables used, DACs are available in direct attach copper cables and active optical cables (AOCs).

Direct attach copper cables are designed in either active or passive versions, providing flexibility with a choice of 1-, 3-, 5-, 7-, and 10-meter lengths. The former provides signal processing electronics to avoid signal issue, thus to improve signal quality. What’s more, the former can transmit data over a longer distance than the latter which offers a direct electrical connection between corresponding cable ends. Both direct attach passive copper cables and direct attach active copper cables have gained popularity in data centers. For instance, EX-QSFP-40GE-DAC-50CM, the Juniper 40G cabling product, hot-removable and hot-insertable, is the QSFP+ to  QSFP+ direct attach passive copper cable assembly, really suitable for short distances of up to 0.5m(1.6ft), appropriate for highly cost-effective networking connectivity within a rack and between adjacent racks.

AOC is also one form of DAC. It uses electrical-to-optical conversion on the cable ends to improve speed and distance performance of the cable while mating with electrical interface standard. Compared with direct attach copper cable, its smaller size, electromagnetic interference immunity, lower interconnection loss and longer transmission distance make it popular among consumers.

DACs are able to provide an end-to-end solution that is easy to maintain, thus helping improve the availability of networks that support mission-critical applications. Fiberstore offers a broad selection of DACs with high quality for state-of art performance, 10G SFP+ DACs, 40G QSFP+ DACs, and 120G CXP+ DACs all included. For more information about DACs, you can visit Fiberstore.