In long haul fiber optic transmission, OEO transponder also can work as repeater to extend network distance by converting wavelengths (1310nm to 1550nm) and amplifying optical power. The OEO converter converts the weak optical signals from the fiber into electrical signals, and regenerates or amplifies, then recovers them into strong optical signals for continuous transmission.

Having known about the function of OEO transponder, here let me take some application cases as examples to illustrate its applications clearly.

In this solution, three OEO transponders are used in this links according to the requirements of the client. The use of the first OEO converter at site A is to convert the signals from MMF to SMF, achieving the long distance transmission between site A and C. The second OEO transponder re-generates and amplifies the optical signal, then convert the it from dual fiber to single fiber. At site B, the OEO transponder re-amplifies the optical signal and recovers it to multimode transmission.

This solution is more complicated than the first one. There are three sites with fiber links between them. The distance between site A and B is 84km, and site B and C is 1km. Site A and C is 84km too. All the 10G connections are dual fiber transmission. Here is a simple picture of this solution. 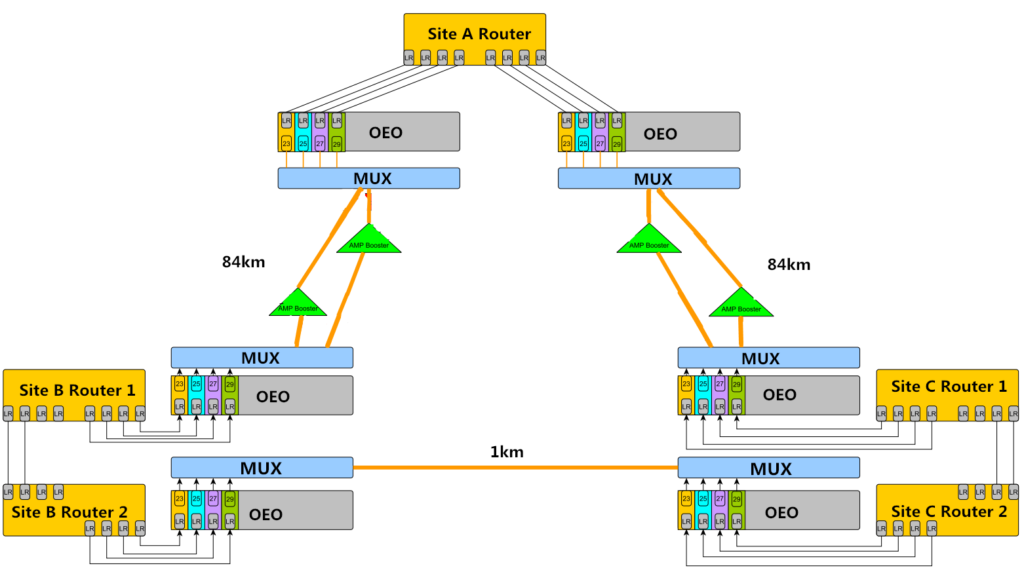 Advantages of this solution: using OEO transponder for wavelength conversion. Converting common 10G signals into DWDM wavelengths and transmitting them with DWDM MUX/DEMUX increase the network capacity easily. At the same time, it also reduces the damage of optical transceivers.

OEO transponder is an important components in optical networks. This post gives a simple analysis of OEO transponder application case. Hope it’s useful for you. FS.COM supplies high quality 10G OEO converters like SFP+ to SPF+ and XFP to XFP, and 40G WDM transponder like QSFP+ to QSFP+. If you want to know more detailed information, please contact us via sales@fs.com.