The modern world is developing in full speed, so is the telecommunication industry. Not long ago 10GbE switch had been a luxury, so was exclusively affordable to large enterprises. And many individuals and businesses used 10/100Mb switch and could only get to gigabit switch for 1Gb backbone. However, this situation is changing due to price dropping and proliferating market demand. Now more and more SMBs and individuals are using gigabit switch and attempt to access 10Gb switch. As thus questions like whether to deploy gigabit switch as 1Gb backbone or 10GbE switch as 10Gb backbone has stirred heated discussion on many forums. This article is to give some reference for 1Gb backbone vs 10Gb backbone selection guide.

What Is 1Gb Backbone Gigabit Switch?

Simply put, 1Gb backbone refers to the networking configuration that gigabit switch is used in the data center as core switch. A typical scenario in 1Gb backbone configuration is to run 10/100Mb access layer switches with 1Gb uplink back to a central gigabit switch. In this case the 1Gb uplink on the 100Mb switch receives the 1Gbps from the switch gigabit, then divides the 1Gb bandwidth to its terminal endpoints. Restricted by the normal port 10/100Mb, max. 100Mb is available for access points. As thus 100Mb switch has gradually been obsoleted by gigabit switch.

What Is 10Gb Backbone 10GbE Switch?

Similarly, 10Gb backbone refers to the configuration that 10GbE switch serves as core switch in the data center. Then running gigabit switches with 10Gb uplink back to the central 10Gb switch. To illustrate 10Gb backbone configuration, here is a deployment scenario. In this case, we deploy S5800-8TF12S 10Gb SFP+ switch as core 10GbE switch in the data center. Using S3910-48T4S 48 port switch and S1600-48T4S 48 port gigabit PoE switch as access switches, we run fiber patch cables to corresponding 10Gb SFP+ uplinks on these access switches. As thus the 10Gb uplink bandwidth can be divided to the access gigabit switch normal port.

Assumption on the case 10 same endpoints are connected to 10 ports on the gigabit Ethernet switch. Then each can obtain max. 1000Mb from the 10Gb uplink bandwidth. In this case, the gigabit speed is retained. If the upper layer switch is a gigabit switch, then each endpoint can only get 100Mb. 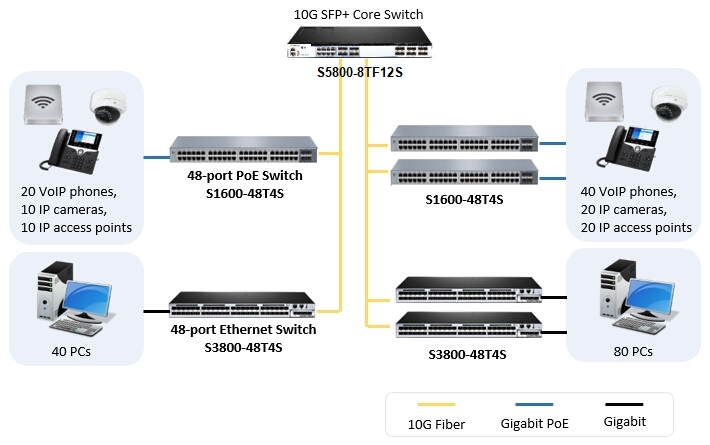 Generally speaking, deploying gigabit switch for a 1Gb backbone vs 10GbE switch for a 10Gb backbone depends heavily on virtualization application. Even in a small office with only several PCs, demanding applications for high bandwidth may require a backbone 10Gb switch. That is, if you or your employees must deal with high-load pictures and videos every day, 10GbE switch backbone is a must to ensure smooth operation and work efficiency. Or you may easily get stuck in network congestion. Say a regular video conference in a midsize enterprise can randomly drop, which wastes time and drag down schedule process.

Also, pay attention to number of users. Counting all the current endpoints: computers, wireless APs, IP phones, etc. And try to measure the load traffic by plotting utilization. Then take future expansion into consideration. If your backbone gigabit switch ports are already hot for using the most bandwidth provided, and you still need to add office devices, then your network is on the verge of severe congestion. In this case 10Gb switch backbone or higher is the choice to go.

In summary, 1 Gb backbone gigabit switch vs 10Gb backbone 10GbE switch selection depends on the bandwidth your virtualization applications require. In detail, 10Gb switch shall function as 10Gb backbone in the case mass data transfer is a regular task. Thus the gigabit switch normal ports can share max. 1Gb bandwidth. Otherwise you can remain your 1Gb backbone. But for 1Gb access, deploying gigabit PoE switch to replace your 100Mb access switch is a future-proofing and feasible solution to go. FS SFP switch is a good choice for 1Gb backbone core switch whereas SFP+ switch for 10Gb backbone core switch.

With the tendency for higher speed network, 10Gb switch has already become familiar with home individuals, no longer the privilege of enterprise operators. However, the issue of SFP to SFP+ compatibility always puzzles many network switch users, even some engineers. Will 1Gb SFP transceivers work with 10Gb SFP+ ports on 10Gb switch? Or will 10Gb SFP+ run at 1Gb to link gigabit switch? And If 10Gb optics in a switch can auto-negotiate to 1Gb when the other end is 1Gb? All these related questions origin from the link between 10Gb SFP+ slots on 10Gb switch and 1Gb SFP ports on gigabit switch. Thus this article will reveal the mask of SFP to SFP+ compatibility from this point of view.

Will 1Gb SFP transceivers/modules work with 10Gb SFP+ ports? The answer is “Yes” in most cases. There are many vendors providing 10Gb switches that can take both a 10G SFP+ and a 1G SFP in the 10Gb SFP+ slot, but not at the same time for obvious reasons. This option is supported by dual speed operation. So before plugging a SFP transceiver into the SFP+ port on your 10GbE switch, one must consult your rep to make sure the 10Gb switch port support dual speed.

Will 10Gb SFP+ running at 1Gb? The answer is definitely “No”. SFP optics do work in SFP+ slots in most cases, but SFP+ optics on 10Gb switch can never work in SFP slots on gigabit switch. The reason is about a power availability thing. As we know, once an module is installed, the speed of the port is decided. Most SFP+ slots are backward compatible with SFP modules to run at 1G speed. However, the SFP slots on gigabit switch cannot support the 10G speed required by SFP+ modules. For instance, most Cisco and FS 10Gb switches support 10G SFP+ and 1G SFP optics on their SFP+ ports. But some Brocade gear and HP A-series models are SFP+ only. One need to double check the compatibility of this switch with the vendor rep.

Unlike copper SFP modules supporting 10/100/1000 auto-sensing, fiber optics do not support auto-negotiation. Because this technology is based on electrical pluses but not optical pluses. Thus 10Gb SFP+ optics on 10Gb switch can not auto-negotiate down to 1Gb if the other end is gigabit switch. In fact, most SFP and SFP+ transceivers only run at its rated speed and the transceivers at both end of the cable should at the same speed. For example, if a 10Gb SFP+ module is plugged into the 10Gb switch port, it will only run at 10Gb. In this case if you link it to the gigabit switch port, it will not work. When sticking a 1Gb SFP module in the 10G SFP+ port, the 10Gb switch will only run at 1Gb. As thus you can link it to gigabit switch.

Sometimes the 10GbE switch port would lock the speed at 1G until you reconfigure the switch to 10G. It is noted that SFP+ port usually enables a speed under 1G, which means one cannot insert 100Base SFP modules into SFP+ ports on 10Gb switch.

For the issue of SFP to SFP+ compatibility, a simple response is that most SFP+ can take SFP but not vice versa. The uncertain situation requires one to ask their switch vendors for clear reply. Thus 10Gb switch port is possible to link to gigabit switch port to run at 1G speed. The only thing you need to do is to plug each the aforesaid port with a 1Gb SFP module, and then connect the two modules on the 10Gb switch and the gigabit switch with a corresponding fiber patch cable or Ethernet copper cable.

Since the introduction of 10 Gigabit Ethernet, the ever-increasing demand for high bandwidth has been driving the pervasive application of 10Gb Ethernet switch. However, for its high cost it is normally limited to the enterprise and server market and doors are shut down for home individual users. Nevertheless, gamers and speed addicts always hanker for the faster hardware, so the demand for high bandwidth at home provided by 10Gb switch is rising too. Only once attempt to 10GbE, one will never want to turn back to 1 Gigabit Ethernet. 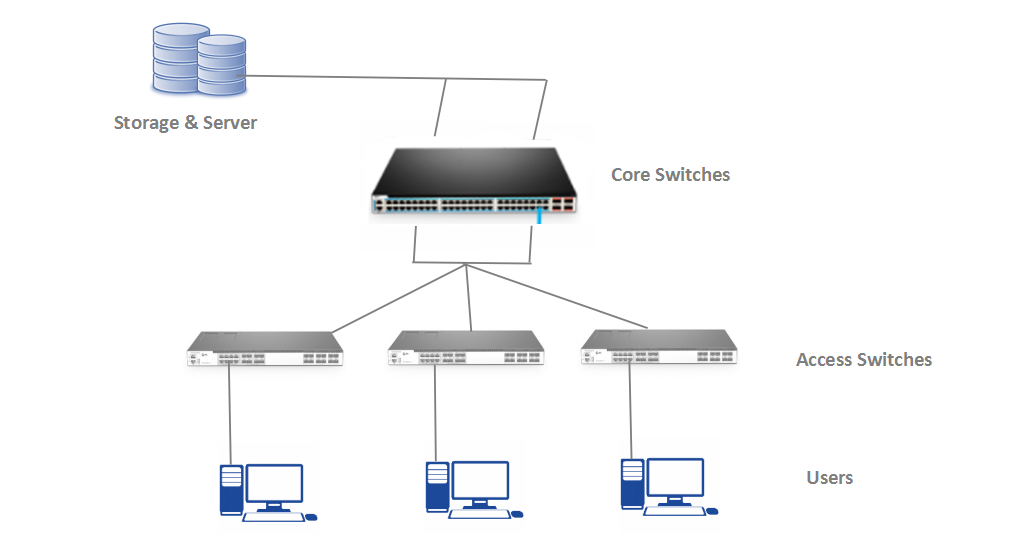 Overview of 10Gb Switch for Home

Generally, there are several versions of 10GbE switch. The first is 1GbE switch with a few 10Gb SFP+ uplinks, such as FS S5800-48F4S 48 port 1GbE SFP switch with 4 10GE SFP+ ports. The second is 10GbE switch with 10Gbase-T ports or 10GE SFP+ ports as main connection, such as FS S5900-24S 24 10GE SFP+ switch. Another is 10GbE switch with a few 40/100G QSFP+ uplinks, such as FS N5850-48S6Q 10GbE ToR/Leaf switch with 6 QSFP+ 40GbE ports. For 10Gb home Ethernet, the former two switches can be taken into consideration for their cheaper price. Especially for the first type, it is very popular for building 10Gb home network. Here are some reasons. First, one can connect the host, virtualized server and workstation with the 10Gb links. Second, 10Gb SFP+ connection usually costs less power and expense than 10Gbase-T switch. The table below lists the most cost-effective 10Gb switches provided by FS.COM.

How One Benefits from 10Gb Switch for Home?

As we know, we can connect 10G NICs directly and interconnect devices with 10Gb SFP+ cables to achieve 10Gb network. Thus many people get confused about one question: why not using cheaper 10G NICs rather than expensive 10Gb switch? For very small 10G network with a few computers, NICs indeed can be a solution. But how about home networks with more users? For instance, you have 4 computers, then you need to buy 8 total 10G NICs and corresponding cables for connection, which can lead to expensive additional cost for expansion. So at this point home users need to think about deploying a 10Gb switch. Moreover, 10Gb switch features low- latency, fewer bottlenecks, simple virtualized environment, spare bandwidth, rack space efficiency, low power consumption and expansion flexibility.

How to Build 10Gb Switch for Home?

To set up a 10Gb home network, several components are required. 10GbE core switch, access switch with 10G uplinks, 10G network interface card (NIC) for storage and server, and 10G cabling. For 10G switch selection for home, maybe you should avoid some brand-name vendors for their high expense. FS specially designed S3900-48T4S 10Gb switch for home users with a low offer. It has 48 1000Base-T ports with 4 10GbE SFP+ links. For 10G cabling selection, there are RJ45 copper cable and SFP+ fiber capable of working with 10Gb/s. Usually, home users have no need to switch from Ethernet copper cabling to fiber cabling. But for 10Gb speed, you’d better use Cat6a or Cat7 Ethernet cables to resist interference. And for NACs and severs with 10G SFP+ links, the most cost-effective solution is to use 10G (Direct Attach Cable) DAC. It is a copper cable with SFP connection on each side available for various lengths. For example, FS SFP-10G-DAC, Cisco compatible SFP+ to SFP+ connection, is a passive direct attach copper twinax cable with length ranging from 0.5m to 7m.

This article focused on the 10Gb switch for home usage. It introduced the main types of 10Gb switch available for home users. And gave some practical recommendations under cost-efficient considerations for building 10GbE home network. For gamers and any other Tech or speed pursuers, deploying 10Gb switches for home network will provide you superior experience of high bandwidth. FS provides 10Gb switch with 12/24/32/48 ports for different requirements. You can visit our official website for more information.