As the network grows, the network equipment producers flourish, bringing many different exclusive products into the market. How to manage or operate so many equipment as the different vendors own diversified CLI and web interface to debug and configure. It’s time to put forward some new technologies, SDN vs. OpenFlow vs. OpenStack to tackle this problem.

SDN VS OpenFlow vs. OpenStack: What Are They?

OpenFlow: the Enabler of SDN

To turn the concept of SND into practical implementation, we need to put into place some protocols, among which OpenFlow is the most desirable one. So what is OpenFlow?

OpenFlow is a communications protocol that empowers a network switch or router to access the forwarding plane over the network. Also it can serve as a specification of the logical structure of the network switch functions. We know that each switch vendors may have their own proprietary interfaces and scripting languages, and this protocol enables them to work coordinately while avoid exposing their technology secret inside switches to the public.

OpenStack is an open source cloud computing management platform project that combines several major components to accomplish specific tasks. Its existence confronts the AWS of Amazon, as it allows all participators to access the source code and share some ideas, if they want to. It is convenient and reliable with strong compatibility and adaptability, gaining support from many vendors. 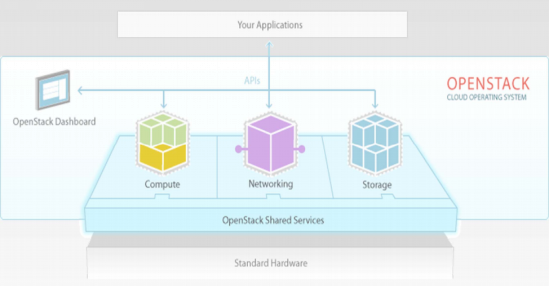 SDN vs. OpenFlow vs. OpenStack: What’s the Difference?

SDN and OpenFlow are prone to be confused and misunderstood. Take a look at SDN vs. OpenFlow, the two are indeed interconnected. First of all, as an open protocol, OpenFlow underpins the various SDN controller solutions. The complete SDN solution is taking SDN controller as the core, backed by OpenFlow switches and NFV to offer bountiful SDN app for a new smart, dynamic, open, custom network.

OpenFlow, since its release, has gained achievements in hardware and software support. CISCO, Juniper, Toroki and pronto have all launched network equipment like 10gbe switch, router, and wireless access point which support OpenFlow. In contrast, OpenStack covers many aspects like network, virtualization, operation system, and server. It is an ongoing cloud computing platform.

Network orchestration OpenStack copes with the component organization of a particular group of assets, from open source or closed implementations, thus we can say that it can be considered how a software-defined network is deployed. While SDN control serves like the commander of organizers and deals with maintaining consistent (as far as is feasible) policy across multiple groups of assets, so we deem it much like the “why.”

SDN vs. OpenFlow vs. OpenStack, the three terms that are of far-reaching significance, attract more attention from the public. This article may provide you with some help to know them at the very first step. Till now, the networking technologies are still advancing, knowing what they are at present doesn’t mean the truly master of it. There is still plenty of room left to be explored.