By mid-1999 the most widely known representative of the pilot high-density connectors was the LC connector (link control) developed by Lucent Technologies in 1997 (and by other sources in 1996). This connector is produced in both single-mode and multimode versions. It uses a ceramic ferrule with a reduced diameter of 1.25 mm and a plastic housing equipped with an external lever-type latch to fit in a coupler (Fig.4.30). The connector is produced in both simplex and duplex options.

According to existing and prospective editions of SCS standards, the optical connector designers guarantee up to 500 cycles of connections and disconnections without deterioration of loss coefficients. This is accomplished by using ceramic ferrules and by the push-pull principle of connecting the plug enables its installation on a buffered fiber (0.9mm) and on fiber patch cords in 2.4-mm loose tubes. The LC plug can be installed in field conditions on 900-mm fiber, but it can only be fabric-bonded on cables in 2.4-mm loose tubes when manufacturing patch cords because of its small dimensions.

The basic characteristics of LC connector are listed in Table.4.13. 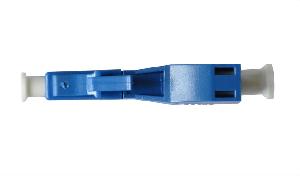 Another version of this connector is the MU connector by NTT. This product can be considered a compact variant of the SC connector. Similar to the previous version, the MU connector has a housing with an internal latch (based on the push-pull principle). It is approximately half the size of the SC connector due to the decreased diameter of the ferrule and the miniaturization of other components. Both simplex and duplex options of the connector are commercially available. 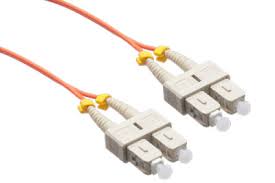 The Multimode 50/125 Duplex Fiber Patch Cable is terminated with one LC (male) connector and one SC (male) connector, to provide the necessary connection between fiber networking devices for high-speed, long distance networks. 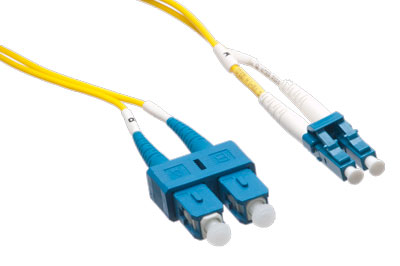 Ensuring optimal data transfers and network stability, 50/125-micron cables offer nearly three times the bandwidth of 62.5/125-micron cables, so your data will be transferred at higher rates over longer distances.