Recently, fiber optic cable becomes more popular in telecommunication because of its great bandwidth, fast speed, long distance transmission and low cost. Single mode fiber and multimode fiber optic cables are important in many networks to transmit optical signals. Though they have the same working principle and functions, each of them has their own advantages and disadvantages.

People who have work experiences with optical networks may be familiar with fiber optic cables. And they may know the basic structure and differences between multimode and single mode fiber optic cable. Here is a simple table showing the basic knowledge of them.

From the table we can see, multimode fiber cable has a larger core diameter. And it has multiple transmission modes, but they are only suitable for short distance connections. While single mode fiber has a small core diameter, through which only one mode will propagate typically 1310 or 1550nm. Because of that, these cables are often deployed in long distance transmission due to its less dispersion. Following is a direct-viewing picture shows the diameter differences between single mode fiber and multimode fiber cables. 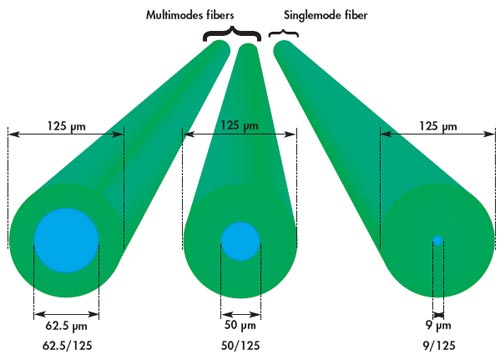 Which One to Choose, Single Mode Fiber or Multimode Fiber?

Modern information network provides many possible way of passing information between computers, servers, network center, TV, radio and telephone. Two of the most popular way to make these connections coaxial cable and optical fiber cable. Both of these types of cable can be used for carrying video, audio, and other forms of data, and both can offer you distinct advantages and disadvantages in setting up the data network of your dreams.

Coaxial cable has been widely used since about at the beginning of the twentieth century. This is a testimony to the resilience and cable quality, its universality has been able to unchallenged still more or less in their long life. Coaxial cable is the key to success is the shielding design, makes the copper core cable to transmit data fast, don’t succumb to interfere with or damage the environment factors.

All of the coaxial cable is composed of a copper core, and in turn surrounded by, and then a weaving dielectric insulation copper shield, finally a plastic sheath. These four layers allow coaxial cables to be deployed in almost any conveivable setting, and for most of the twentieth century, coax cables were the cable of choice of setting up almost every variety of communications network.

Originally, coax cable was used by the military to transmit radio and telephone signals.

As terrestrial and cable, coaxial cable into the more common everyday use. When the popularity of the internet, become China’s largest dielectric coaxial cable transmission of signals between computers all over the world.

Though coaxial cable has proven to be a resilient means of data transfer, it does have its drawbacks. Coax cables often fall victim to a phenomenon known as signal leakage, wherein imperfections in a cable’s shielding lead it to provide a weak signal that is subject to interference (this is how you wind up getting a fuzzy signal from your cable television connection).

Many different kinds of coaxial cable is available and that ir is important to find out which type is best for your data requirements, if the coaxial cable is you choose to use your network project.

Whereas coaxial cable depend on the copper as medium to transmit data, the core components of the optical fiber cables simply select ultrafine glass known as silicon. Fiber optic cable is still a newly invented, only into widespread use in 1980s. Though usually more expensive than coaxial cable, optical fiber offers several advantages, will ignore any large-scale digital data network.

Instead of using electricity as a medium in which to pass information (as is the case with coaxial cables), fiber optic cable employ light to carry remarkably large amounts of data at a remarkably fast speed. Fiber optic cable will usually contains several silicon the spread of the “nuclear” increasing its capability of providing cable data transmission.

Because of their expense, relative novelty, and sophisticated design, fiber optic cables are found less frequently in residential and consumer settings than coaxial cables. Coax cables have earned a deserving reputation for being easy to install and more than able to take a beating. While fiber optic cables offer a higher quality of data transfer than coaxial cables, they are probably best employed for large-scale professional networks, such as those found within an academic or business campus. If home installation or medium-capacity data transfer is your goal, then you’d probably be better off sticking with coaxial cable.