The escalating deployments of servers with multi-core processors and demanding applications are driving the need for 10 Gbps connections. Intel X520 10 GbE Adapter is the most flexible and scalable Ethernet adapters for today’s demanding data center environments. At the same time, 10G SFP+ optics play the most important role for its 10G connectivity. But seriously, do you know which 10G SFP+ optics are compatible with the Intel Ethernet converged network adapter X520 series? This blog will give you solutions.

Intel X520 adapter is powered by reliable and proven 10G Ethernet technology, which offers high performance for high-IO intensive applications and showcase the next generation in 10 GbE networking features for the enterprise network and data center. It is designed for multi-core processors, which supports for technologies such as multiple queues, receive-side scaling, multiple MSI-X vectors and Low Latency Interrupts. It addresses the demanding needs of the next-generation data center by running mission-critical applications in virtualized and unified storage environments. In a multicore platform, the Intel X520 adapter supports Intel I/O Virtualization Technology (IOVT), which helps accelerate data across the platform, therefore improving application response times. For virtualized environments, it offers advanced features with VMDq (Virtual Machine Device Queues) that lower processor utilization and increase I/O performance. 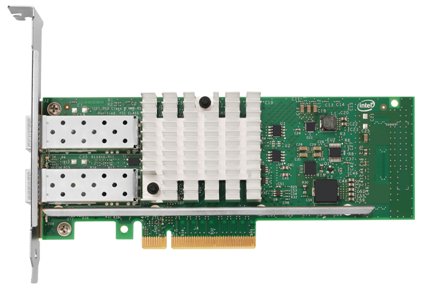 A 10 Gigabit Ethernet network is essential for businesses that demand high bandwidth for virtualization and fast backup and restore for an ever-growing amount of data. To ensure maximum flexibility, Intel X520 adapters support the ability to mix any combination of the SFP+ optical modules, direct attach copper cables, or 1000BASE-T SFP modules. Besides, 10G SFP+ Optics are available in both short-range (SR) 850 nm and long range (LR) 1310 nm options. This enables customers to create the configuration that meets the needs of their data center environment.

Some 1000BASE-LX and 1000BASE-SX modules can work with Intel Ethernet Converged Network Adapter X520 series. These modules referred to only highlight specifications and compatibility with Intel Ethernet server adapter X520 series. The table lists the tested modules in Table 3. Other similar modules may work but have not been tested (many similar modules can be purchased in FS.COM). Remind you to use your own discretion and diligence to purchase modules with suggested specifications from any third party.

The new QSFP+ single-port X520-QDA1 can connect the server to the latest 40GbE switches with a single cable operating in 4x10GbE mode. This adapter can also utilize existing 10GbE SFP+ switches using the QSFP+ to 4xSFP+ breakout cable. The QSFP+ adapter supports direct attach copper cables and Intel Ethernet QSFP+ SR optical transceivers. Intel Ethernet QSFP+ breakout cables have one QSFP+ connector on one end and break out into four SFP+ connectors on the other end for direct attachment to SFP+ cages. The following table lists the Intel Ethernet QSFP+ cable for Intel adapter X520-QDA1 in Table 5.

Copper SFP vs Optical SFP: Which One Is the Best to Use?

How Many Types of SFP Transceivers Do You Know

Well, the deployment of 10GbE requires cost-effective solution. In general, there are several 10GbE interfaces to choose from, including CX4, SFP+ fiber, SFP+ Direct Attach Copper (DAC), and 10GBASE-T. As for CX4, it’s an older technology that does not meet high density requirements. Although most deployment chooses SFP+ fiber (eg. F5-UPG-SFP+-R) solution, fiber is in no case cost-effective. Besides, SFP+ DAC is limited by its short reach. In such a case, 10GBASE-T is selected as the less power-consuming and cost-saving solution for 10GbE. This article details at what are the reasons that drive the 10GBASE-T to become the suitable 10GbE media option.

Firstly, let’s figure out what is 10GBASE-T. 10GBASE-T, or IEEE 802.3an-2006, is a standard released in 2006 to provide 10Gbit/s connections over unshielded or shielded twisted pair cables, with distances up to 100 meters (330 ft) with RJ45 connectors. 10GBASE-T cable infrastructure can also be used for 1000BASE-T, allowing a gradual upgrade from 1000BASE-T using auto-negotiation to select which speed to use.

Listed below are several reasons why 10GBASE-T become the 10GbE media option.

Like other copper network implementations using BASE-T standards, 10GBASE-T works for link lengths up to 100 meters, giving network designers a far greater level of flexibility in connecting devices in the data center. Able to realize flexible reach, 10GBASE-T can accommodate either top of the rack, middle of row, or end of the row network topologies, making server placement even more easy and convenient.

10GBASE-T is backward-compatible with existing 1GbE networks, meaning that it can be deployed based on existing 1GbE switch infrastructures in data centers that are cabled with CAT6 and CAT6A (or above) cabling. In other words, when migrating from 1GbE to 10GbE, 10GBASE-T provides an easy path, saving cost.

In widespread deployment of 10GbE networks using 10GBASE-T interface, one challenge lies in the fact that the early physical layer interface chips (PHYs) consumed too much power. The original gigabit chips were roughly 6.5 Watts per port. With technology improvements, the chips improved from one generation to the next, leading to less 1 W per port for 1GbE interfaces. It’s the same with 10GBASET. And owing to the manufacturing processes, the 10GBASE-T reduction in power consumption has been made possible. The figure below shows the relationship between power consumption and wavelength.

When 10GBASE-T adapters were first introduced in 2008, they required 25 W of power for a single port, and later, power has been reduced thanks to the successive generations of developing newer and smaller process technologies. The latest 10GBASE-T adapters require less than 6 W per port,which makes 10GBASE-T suitable for motherboard integration and high-density switches.

Depending on packet size, latency for 10GBASE-T ranges from just over 2 µs to less than 4 µs—a much tighter latency range. For Ethernet packet sizes of 512 bytes or larger, 10GBASE-T’s overall throughput offers an advantage over 1000BASE-T. Latency for 10GBASE-T is more than three times lower than 1000BASE-T with larger packet sizes. For those enterprise applications that have been operating for years with 1000BASE-T latency, 10GBASE-T latency only makes things better. Many products designed for Local Area Network (LAN) purposely add small amounts of latency to reduce power consumption or CPU overhead.

Broad use of 10GBASE-T interface simplifies data center infrastructures, making it easier to manage server connectivity while delivering the bandwidth needed for heavily virtualized servers and I/O-intensive applications. As the cost continues to fall, and new technological processes further lower power consumption, all these make 10GBASE-T suitable for integration on server motherboards.

10GBASE-T offers the flexible reach, and its backward compatibility with existing 1GbE networks makes it the ideal cost-effective media option for 10GbE infrastructure. As a professional fiber optic product manufacturer and supplier, Fiberstore provides countless 10GBASE-T transceivers for 10GbE applications. Of course, besides 10GBASE-T, other 10GBASE standard transceivers also available in Fiberstore, such as 10GBASE-ER SFP+ (J9153A). For more information about 10GbE interfaces, you can visit Fiberstore.