It seems to be a commonplace for us to use an amplifier in fiber optic transmission which helps to improve signal electricity. However, it may occur sometimes that there is just too much light delivering through a fiber optic receiver and should better be reduced. In this case, a component known as fiber optic attenuator can help to reduce the power level of the signal. This article will focus on describing the fiber optic attenuator in details from the perspective of its types and applications.

What Is Fiber Optic Attenuator?

By means of absorption, reflection, diffusion, scattering, deflection, diffraction and dispersion, etc, the fiber optic attenuator works efficiently to reduce the power of the signal. Optical attenuators usually function by absorbing the light, that resembles sunglasses absorb extra light energy. There exists a working wavelength range in which they absorb the light energy equally. They should not reflect the light since that could cause unwanted back reflection in the fiber system.

The Types of Fiber Optic Attenuator

There are a number of different forms of fiber optic attenuators by various classified methods, but basically, fixed attenuators and variable attenuators serve as the most common types that we can find in the market.

Fixed attenuator, as the name of which has indicated clearly, is designed to have an unchanging level of attenuation. It can theoretically be designed to provide any amount of attenuation that is desired. Fixed attenuator are typically used for single-mode applications and it consists of two groups: in-line type and connector type. In-line type appears like an ordinary fiber patch cable with a fiber terminated by two connectors. Connector type attenuator looks like a bulk head fiber connector, which has a male end and a female end as well. Fixed attenuator mates to regular connectors of the identical type such as FC, ST, SC and LC. The picture below shows a fixed male-female-SC/UPC SM 10dB fiber optic attenuator. 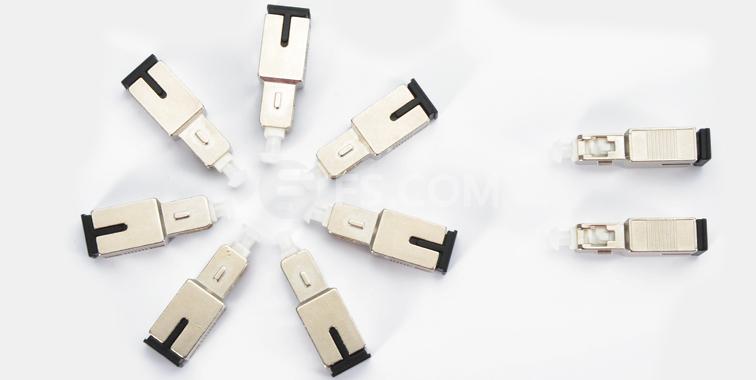 The Applications of Fiber Optic Attenuator

Fiber optic attenuator can be used to test power levels margins by temporarily adding a calibrated amount of signal loss. Besides, it is often installed permanently to properly match transmitter and receiver levels. And the sharp bends stress optic fibers and can cause losses.

From what we introduced above, you may have had a better understanding of the basic elements related to fiber optic attenuators. As an essential device in fiber optic transmission, it plays an indispensable role in controlling the power level of the optical signal. Those basic knowledge mentioned above may help provide a guideline to select the right fiber optic attenuator that matches the required applications precisely.

Variable optical attenuators are normally used for testing and measurement. Also they could be used in EDFAs (erbium doped fiber amplifier) for equalizing the light power among separate channels. Fixed optical attenuators have fixed values specified in decibels. The attenuation is expressed in dB and its value cannot be varied. It is ideal for attenuating single-mode fiber connectors in various applications.

Why Use Optical Attenuators?

Optical attenuators is a critical component of any fiber optic network. Using an attenuator, the transmission signal into the dynamic range of the receiver could be adjusted. This increases the life span of the optical equipment and ultimately provides a clearer transmission signal. Moreover, the utilization of optical attenuators could assure the linear behaviour of optical fiber receivers avoiding optical power overloading. At the same time, it is able to balance the optical power into passive optical network branches and can make measurements on an optical telecommunication system.

Optical attenuators usually work by absorbing the light, like sunglasses absorb the extra light energy. Typically, they have a working wavelength range in which they absorb the light energy equally. However, they should not reflect the light since that could cause unwanted back reflection in the fiber system. Another type of attenuator utilizes a length of high-loss optical fiber, that operates upon its input optical signal power level in such a way that its output signal power level is less than the input level.

Optical attenuators are commonly used in fiber optic communications. They could be used to test power level margins by temporarily adding a calibrated amount of signal loss, or installed permanently to properly match transmitter and receiver levels.

One of the important applications of optical attenuators is channel balancing in WDMs (wavelength division multiplexing). As illustrated in the following picture, an eight channel wavelength multiplexed signal from a trunk line is demultiplexed into individual signals. The signals are of different intensities, and need to be balanced to avoid saturating any of the receivers. So each channel is sent through a corresponding port on an eight channel MEMS (micro-electro-mechanical systems) VOA (variable optical attenuator). The signal strength through the optical attenuator outputs is monitored by a control circuit. If the output signal gets too high or too low, the corresponding optical attenuator is adjusted to bring the light level to the correct range.