Wavelength division multiplexing (WDM) is a commonly used technology in optical communications. It combines multiple wavelengths to transmit signals on a single fiber. To realize this process, CWDM and DWDM mux/demux are the essential part. As we all know, there are several different ports on the WDM mux and demux. This article will give a clear explanation to these ports and their applications in WDM network.

Line port, sometimes also called as common port, is the one of the must-have ports on CWDM and DWDM Mux/Demux. The outside fibers are connected to the Mux/Demux unit through this port, and they are often marked as Tx and Rx. All the WDM channels are multiplexed and demultiplexed over this port.

Like the line port, channel ports are another must-have ports. They transmit and receive signals on specific WDM wavelengths. CWDM Mux/Demux supports up to 18 channels from 1270nm to 1610nm with a channel space of 20nm. While DWDM Mux/Demux uses wavelengths from 1470nm to 1625nm usually with channel space of 0.8nm (100GHz) or 0.4nm (50GHz). Services or circuits can be added in any order to the Mux/Demux unit.

Monitor port on CWDM and DWDM Mux/Demux offers a way to test the dB level of the signal without service interruption, which enable users the ability to monitor and troubleshoot networks. If the Mux/Demux is a sing-fiber unit, the monitor port also should be a simplex one, and vice verse.

Although there are several different ports on WDM Mux/Demux, not all of them are used at the same time. Here are some examples of these functioning ports in different connections. 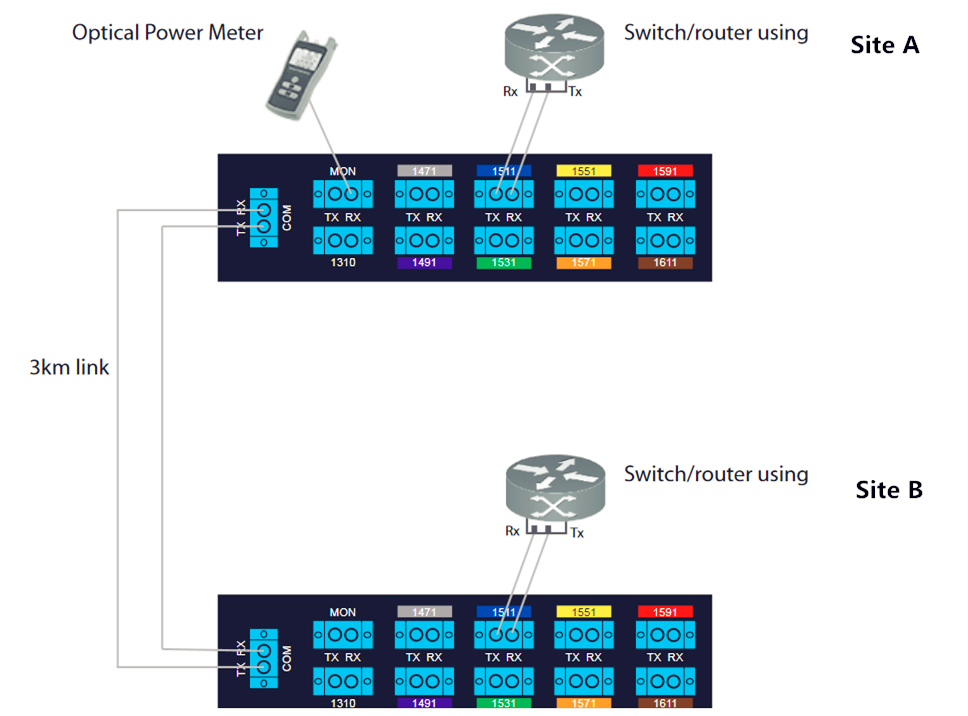 This example is a typical point-to-point network where two switches/routers are connected over CWDM wavelength 1511nm. The CWDM Mux/Demux used has a monitor port and 1310nm port, but the 1310nm does not put into use. In addition, an optical power meter is used to monitor the power on fibers connecting the site A and B.

In this example, two 40 channels DWDM Mux/Demux with monitor port and 1310nm port are used to achieve total 500Gbps services. How to achieve this? First, plug a 1310nm 40G or 100G fiber optical transceiver into the terminal equipment, then use the patch cable to connect it to the existing DWDM network via the 1310nm port on the DWDM Mux/Demux. Since the 1310nm port is combined into a 40 channels DWDM Mux, then this set-up allows the transport of up to 40x10Gbps plus 100Gbpx over one fiber pair, which is total 500Gbps. If use 1550nm port, then the transceiver should be available on the wavelength of 1550nm.

Based on the same concept of using multiple wavelengths of light on a single fiber, CWDM and DWDM are two important technologies in fiber optical communications. As we all know, although the transmission distance of CWDM network is shorter than that of DWDM, it costs less and has the scalability to grow fiber capacity as needed. This article intends to give a simple introduction of components in CWDM networks and to explore some examples of CWDM network deployment cases.

CWDM Mux/Demux, which is based on the film filter technology, is the basic component in CWDM networks. It can combine up to 4, 8 or 16 different wavelength signals from different fiber extenders to a single optical fiber, or it can separate the same wavelengths coming from a single CWDM source. That’s why CWDM can extend existing fiber capacity.

A CWDM OADM is a device that can add (multiplex) and drop (demultiplex) channels on both directions in a CWDM network. It can add new access points anywhere in CWDM systems without impacting the remaining channels traversing the network. With this ability of OADM, the access points can be added to liner, bus, and ring networks, where the dual direction ring design provides redundant protected architecture.

Requirements: the goal is to install a single mode fiber network in town to connect numerous buildings. Some of these buildings have access to the city LAN. The Public Works building need to connect with Youth & Recreation Center, Library, Immanuel Lutheran School and the Senior Center. And all these buildings should have unfiltered Internet. Besides, the Waster Water Treatment Plant should be connected passing through the Senior Center. All these services are achieved using CWDM technology.

Solution: according to the requirements, this is a CWDM networks with several buildings to connect with. Here is the solution diagram.

In the diagram above, we can see there is an 8CH CWDM Mux/Demux connected with the switches. According to the requirements, Youth & Recreation Center, Library, Immanuel Lutheran School and Senior Citizen Center should be connected with the Public Works and need unfiltered services. Therefore, a 4CH CWDM OADM is placed after the CWDM Mux/Demux. Then the four wavelengths will be drop and into the four buildings. In addition, another CWDM OADM is deployed in Senior center to connect the Waster Water Treatment Plant, to meet the requirement. And each site also needs to use CWDM optical transceivers.

Requirements: Considering the cost, all the wavelengths should be transmitted on a single fiber using CWDM technology.

Solution: according to the requirements, here is a simple diagram showing the solution.

In order to save cost, a 4CH CWDM Mux/Demux is used to multiplex four wavelengths (from three switches and one router) into one single fiber. At the first site B, a 1CH CWDM OADM is installed to remove one wavelength which is associated with network B. And other three sites are the same—dropping one wavelength associated with corresponding switch or router.

This article mainly introduces two CWDM network deployment examples. All the components like the CWDM Mux/Demux, CWDM OADM and CWDM transceiver are available in FS.COM. If you are interested in them, please contact us via sales@fs.com.

Related article:Differences between CWDM and DWDM

In addition, single fiber transmission is popular in many places.

CWDM technology enables multiple channels (wavelengths) to be transmitted over the same fiber cabling and is able to provide a capacity boost in metro and access networks. Each channel carries data independently from each other, which allows network providers to transport different data rates and protocols (T1, T3, Ethernet, Serial, etc) for different customers or applications. Then how to achieve single fiber transmission in CWDM networks?

Here is an example of single fiber solution in CWDM system. 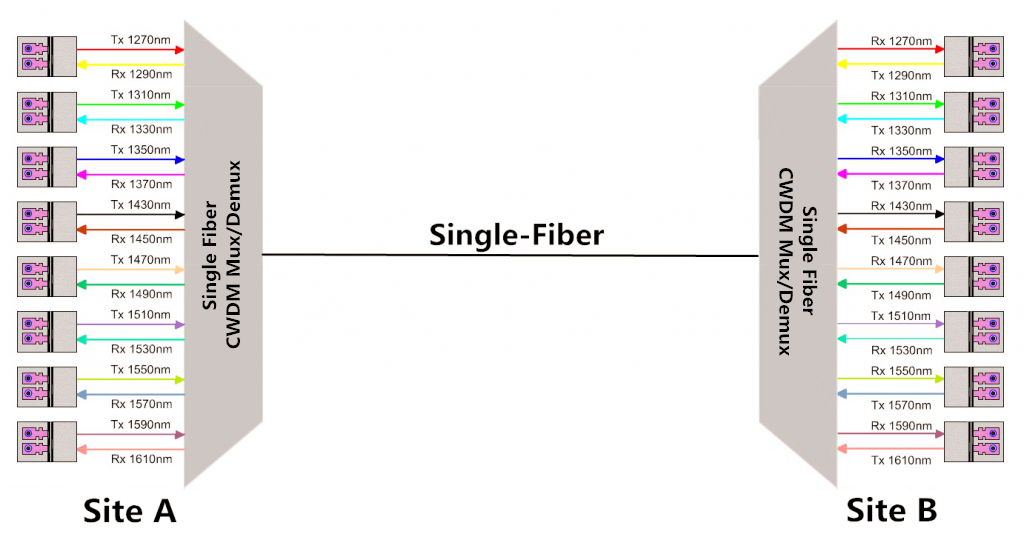 Notes: the use of transceivers connected with the CWDM Mux/Demux should be based on the wavelength of the TX side.

DWDM is an optical multiplexing technology to increase bandwidth over existing fiber optic networks, especially in long haul transmissions. And it can support more channels and higher traffic services such as 40G, 100G of LAN/WAN. Since the cost of DWDM components is high, the single fiber transmission is necessary.

DWDM single fiber transmission can be achieved with the use of single fiber DWDM Mux/Demux. As the following picture shows.

This 8CH DWDM Mux/Demux single fiber solution allows extremely high utilizing of a single fiber strand to pass up to 16 wavelengths, optimizing the use of fiber optic cables. And in long distance transmission, optical amplifier also can be utilized.