In fiber-optic communications, WDM (wavelength-division multiplexing) is a technology which multiplexes a number of optical carrier signals onto a single optical fiber by using different wavelengths (i.e., colors) of laser light. This technique enables bidirectional communications over one strand of fiber as well as multiplication of capacity. Generally, WDM technology is applied to an optical carrier which is typically described by its wavelength.

WDM system uses a multiplexer at the transmitter to join the signals together, and a demultiplexer at the receiver to split the signals apart (see Figure 1). WDM system is very popular in the telecommunication industry because it allows the capacity of the network to be expanded without laying more fiber. By utilizing WDM and optical amplifiers, users can accommodate several generations of technology development in their optical infrastructure without having to overhaul the backbone network. Moreover, the capacity of a given link can be expanded simply by upgrading the multiplexers and demultiplexers at each end.

The power requirements for DWDM are significantly higher. For instance, DWDM lasers are temperature-stabilized with Peltier coolers integrated into their module package. The cooler along with associated monitor and control circuitry consumes around 4W per wavelength. Meanwhile, an uncooled CWDM laser transmitter uses about 0.5W of power.

The DWDM price is typically four or five times higher than that of the CWDM counterparts. The higher cost of DWDM is attributed to the factors related to the lasers. The manufacturing wavelength tolerance of a DWDM laser die compared to a CWDM die is a key factor. Typical wavelength tolerances for DWDM lasers are on the order of ±0.1 nm, while tolerances for CWDM laser die are ±2-3 nm. Lower die yields also drive up the costs of DWDM lasers relative to CWDM lasers. Moreover, packaging DWDM laser die for temperature stabilization with a Peltier cooler and thermister in a butterfly package is more expensive than the uncooled CWDM coaxial laser packing.

To sum up, CWDM and DWDM have different features. Choosing CWDM or DWDM is a difficult decision. We should first understand the differences between them. Fiberstore has various kinds of WDM products, such as 10GBASE DWDM, 40 channel DWDM Mux, CWDM Mux/Demux module and so on. It is an excellent option for choosing CWDM and DWDM equipment.

Related Article: The Advantages and Disadvantages of Multimode and Single-mode Fiber

CWDM vs DWDM: What’s the Difference?

Wavelength division multiplexing (WDM) is a technology or technique modulating numerous data streams, i.e. optical carrier signals of varying wavelengths (colors) of laser light, onto a single optical fiber. The goal of WDM is to have a signal not to interfere with each other. It is usually used to make data transmission more efficiently. It has also been proven more cost effective in many applications, such as WDM network applications, broadband network application and fiber to the home (FTTH) applications and so on. According to channel spacing between neighbored wavelengths, there are two main types of WDM: Coarse WDM (CWDM) and Dense WDM (DWDM). Though both of them belong to WDM technology, they are quite different. We can differentiate them from the definition, data capacity, cable cost and transmission distance.

CWDM system carries less data, but the cabling used to run them is less expensive and less complex. A DWDM system has much denser cabling and can carry a significantly larger amount of data, but it can be cost prohibitive, especially where there is necessary to have a large amount of cabling in an application.

DWDM system is used for a longer-haul transmission through keeping the wavelengths tightly packed. It can transmit more data over a significantly larger run of cable with less interference. However, CWDM system cannot travel long distances because the wavelengths are not amplified, and therefore CWDM is limited in its functionality over longer distances. If we need to transmit the data over a very long range, DWDM system solution may be the best choice in terms of functionality of the data transmission as well as the lessened interference over the longer distances that the wavelengths must travel. As far as cost is concerned, when required to provide signal amplification about 100 miles (160 km), CWDM system is the best solution for short runs. 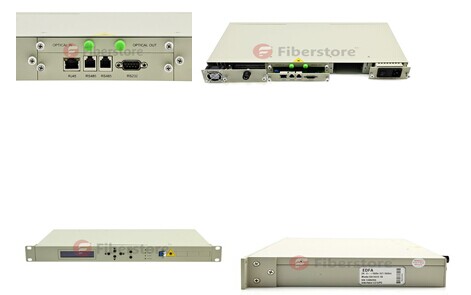